This is from Wed,Thurs,Fri. Remember, you can print out any of these screenshots and captions and tape them into your notebook when ever you want as long as it is done before Packet 1 Notebook check on October 2nd.

PhyFl18ss1.2.1 We started off Wednesday’s discussion trying to sit as still as possible. No matter how we tried, we couldn’t really be motionless because the room was moving, Oklahoma was moving! In order to be motionless we would have to stop the world from spinning on its axis. Knowing the circumference at the equator (approx 3900 miles) we can figure out how fast we are moving. The circumference of the Earth is approx 24,000 miles (to 2 siggies). So since it takes us 24 hours to go around once, we are moving at 1000 miles/hour at the equator. But what about Oklahoma? We don’t have as far to go. Connor did some work and figured out that we are moving at 850mph just sitting in your chair. So if I could stop the orld spinning on its axis, would that make you motionless?

PhyFl18ss1.2.2: No! Because the earth is orbiting the sun. So how fast is that? On average, the earth is 92,000,000 miles away from the sun. So let’s do the same thing we did with how fast we are moving on a spinning earth: See the Unit Analysis above (we’ll practice that method A LOT as the year goes on). When we run the numbers we find that the earth is blazing through the vacuum of space at 66,000 miles per hour!! WOW! That’s cray cray. So . . . if I can stop the earth moving through space, can I finally say that you are motionless sitting in your chair?

PhyFl18ss1.2.3 In 1718, Isaac Newton realized that that there was all this motion going on (earth spinning and orbiting) and he felt like there had to be an ultimate reference point. The earth and the other planets had to be sitting in something, right? There had to be a nonmoving medium for those light waves from the sun to travel through. (For example, sound waves need a medium (air, water, or solid) to travel through). So Newton logically concluded that there had to be this fabric of space that allowed light to travel and that fabric he called “The Luminous Aether” Since Newton was a true stable genius pretty much everyone agreed that this sounded pretty damn smart and the Aether (we spell it ether today) was there eventhough we couldn’t see it, feel it, or smell it. Finally, in 1887 Michaelson and Morely actually used a series of very expensive experiments involving an interferometer at Case Western University in Cleveland, Ohio. To find evidence of the Ether Wind. No matter how precise their instruments, they couldn’t find any evidence of the Eather Wind. We finally had to conclude that there IS NO ETHER. The Earth , Sun and Planets are just floating in . . . . in . . . pure nothingness. Today we know that there is really no such thing as nothingness, but that is a whole different discussion.

PhyFl18ss1.2.4 So even Galileo and Newton assumed that the sun was not moving. Well . . . turns out it moves at around 500,000 mile per hour on its journey around the Super Massive Black Hole at the center of the Milky Way Galaxy. A Galactic Year is how long it takes the sun to go around once. Since our solar system is around 4,500,000,000 years old that means we are somewhere in the neighborhood of 18 galactic years old. Still teenagers! When we were 17, there were dinosaurs walking around the Earth.

PhyFl18ss1.2.5: So if I could stop our solar system would that finally make us motionless? NOPE! Locally, the Milky Way is on a crash course with much bigger The Andromeda Galaxy. But . . . didn’t Edwin Hubble figure out that all Galaxies are spreading apart? True, but there are local exceptions to this general rule. One POSSIBLE explanation is that there is a clump of Dark Matter between the Milky Way and Andromeda that is attracting us together. We are coming together at a speed of 250,000 miles per hour. Yikes! See the Facebook group for the animation show coming attraction over the next 8 Billion years. 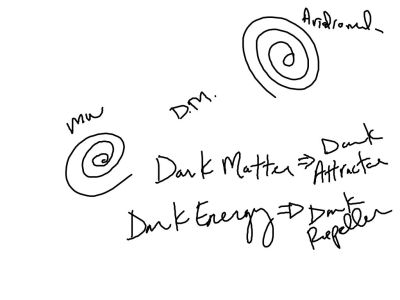 PhyFl18ss1.2.6 Fritz Zwicky proposed this idea of Dark Matter in 1933 (he was laughed at and mostly ignored). I wish he had called it the Dark Attractor, because it isn’t matter like we think about. Neil De Grass Tyson proposes calling Dark Gravity, but I don’t like that either because it doesn’t follow the rules of gravity. There is also Dark Energy out there (or right here in this room). It spends all its time trying to rip you limb from limb, it wants to rip your molecules apart, it want separate your atoms, it would love to separate the quarks that make up your protons. Dark Energy is a bad descriptor, because this doesn’t act like that energy you learned about in Chemistry (remember Joules?) I propose that we call Dark Energy The Dark Separator. People fear or love Slender Man. I guess the Dark Separator is the Slender Man of the Universe. No one’s relly seen it but we know he is there. Out there somewhere . . . waiting. If The Dark Separator wins the Universe will end in a “heat death”.

PhyFl18ss1.2.7 So if you could stop the Milky Way from moving, then you still have the problem that spacetime itself is expanding (daggone it Einstein and Hubble!) So we have to settle with this definition of motionless. 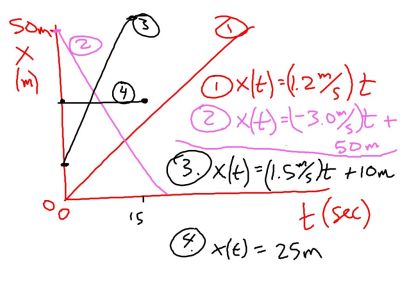 PhyFl18ss1.2.8 Back to the basics. Here is the graph of out four “journeys” on the West Lawn. And the corresponding 4 equations.

PhyFl18ss1.2.9: OUR FIRST EQUATION!! We call this the Red Equation.

PhyFl18ss1.2.10 These are the four Equations from the graph on Sheet 1.3. We left the numbers with 2 siggies.

PhyFl18ss1.2.11: So I guess we ought to talk about scalars and vectors. x, y, and z are just position points. They have no direction. All changes (capital delta (∆)) in position involve MOVING from point A to point B so they are called VECTORS. 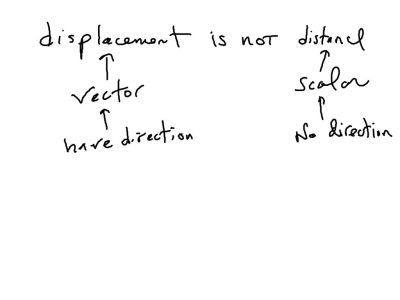 PhyFl18ss1.2.14 “lil d” means instantaneous change in position, in velocity, in acceleration, in temperature, in jerk, in time, in whatever you want.

PhyFl18ss1.2.15 Who was the first one to think of “lil d”? Actually two people in the 1700’s. Isaac Newton (English Genius) and Gottfried Wilhelm (von) Leibniz (German Genius).

PhyFl18ss1.2.16 This is from Sheet 1.3 The 4th function you were supposed to come up with the equation for. Remember, to find the slope, it is just the “rise” (which is negative ∆x in this case) over the”run (which is positive ∆t)