Here are the screenshots and captions (sorry I’m late) . . .

PhySP18SS5.3.1 Tiem Stamp: West Virginia teachers are out on strike for the 8th day in a row asking for a 5% raise. West Virginia is 48th in the nation in it’s teachers pay. Wow. No wonder they are going on strike. hmmm . . . Oklahoma is 50th in teacher pay and dropping fast. sad. 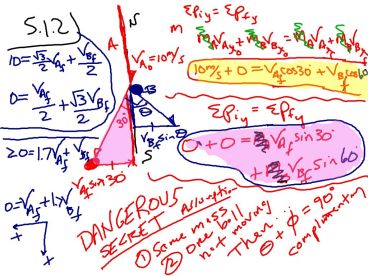 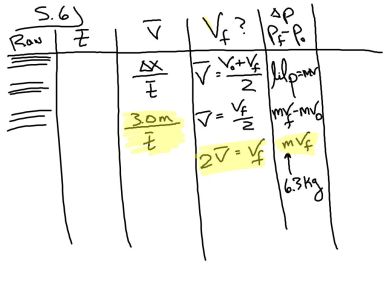 PhySP18SS5.3.5 We compared possible relationships of the variables involved in the Duck Walk Lab.

PhySP18SS5.3.6 From the Duck Walk lab. We came up with the best relationship from the data which turns out to be Newton’s original 2nd law.

PhySP18SS5.3.8 Using Newton’s Original 2nd to solve a problem. Probably a good screenshot for your notebook. 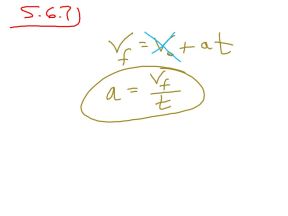 PhySP18SS5.3.10 Here is the orange equation we used to determine the acceleration in the Duck Walk lab. 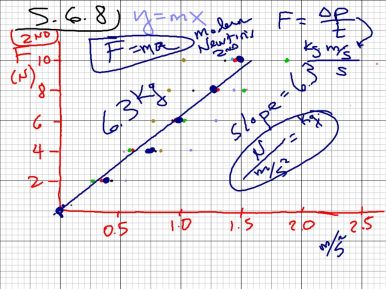 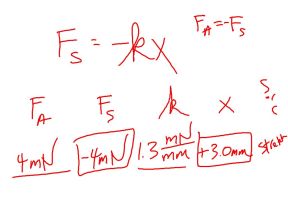 PhySP18SS5.3.23 Hooke’s Law showing the Spring Force (Fs) which is a restoring force. Restoring forces try to restore the situation back to equilibrium.

PhySP18SS5.3.27 5.8.4 Although each object only has one mass, there are sometimes two different interpretations of that mass. One is the resistance the object has to a change in the velocity of the object in any direction.

PhySP18SS5.3.28 Whereas “gravitational mass” is the measure of how much the object is affected by the gravitational field it finds itself in. 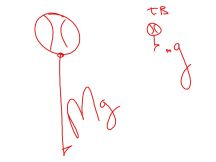 PhySP18SS5.3.29 The best way to describe the subtle differences between inertial mass and gravitational mass is the weird fact that objects with different masses still fall to the earth with the same acceleration (g=9.81m/s/s). Why is this? It’s cray cray. Gravitational mass goes into the weight formula (weight=mg) It is the force that causes the object to accelerate towards the earth. So the basketball dropping from the stadium experiences TEN TIMES the force from the earth to fall to the earth than a tennis ball that is falling beside it. So why doesn’t it fall 10x faster than the tennis ball. They hit at the same time with the same speed. WHAT? It’s because the basketball has TEN TIMES the RESISTANCE to fall (as represented by its inertial mass). So there is a perfect balance of attraction of the two balls to the earth and resistance of the two balls to be pulled to the earth. The tennis ball doesn’t have a lot of weight (mg) so not much of an attractive force, but it only has 1/10 the resistance to the pull of the earth. So they are attracted at the same 9.81m/s/s or 32.2ft/s/s. Wow, this is the longest caption I have ever wrote. 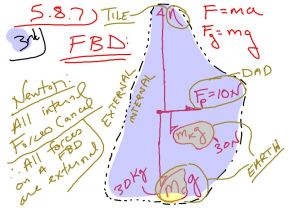 PhySP18SS5.3.32 Print off this screenshot because it will come in handy the rest of the semester.

PhySP18SS5.3.33 Same as the last screenshot with some slightly different information. 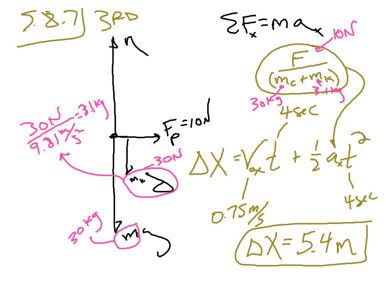 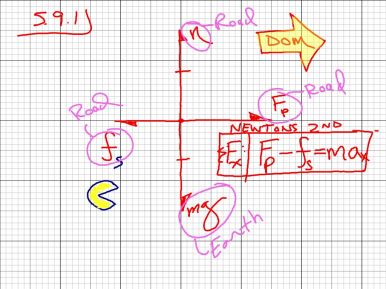 PhySP18SS5.3.37 5.9.1 The fine art of FBDs. You must become an expert at these so you can help all your fellow college classmates.

PhySP18SS5.3.40 Here is the reason why there is no movement at the tire-road contact for a rolling tire. 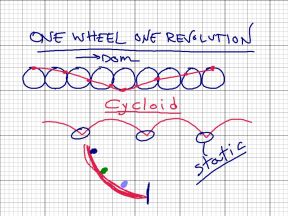 PhySP18SS5.3.41 The making of a cycloid pattern

PhySP18SS5.3.42 Cycloid patterns just touch the ground. There is no tire-road sliding going on. That only happens if you do a burnout or if you slam on your brakes.

PhySP18SS5.3.47 IF you look close at this flower, you will recognize the cycloid pattern

PhySP18SS5.3.48 Cycloid pattern front loads acceleration so that all these balls get to the end at the same time.

PhySP18SS5.3.51 Weight equal gravitational mass times the acceleration due to the mass of the earth. Basically, just a more specific version of F =ma.

PhySP18SS5.3.52 Deriving the thrust equation which is just another specific version of newton’s 2nd.

PhySP18SS5.3.55 With that escaping mass, it’s all about the escape velocity.